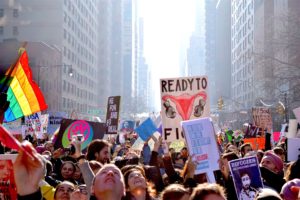 anuary 2017, in one of his first acts as US president, Donald Trump signed an executive order reinstating the Mexico City policy, otherwise known as the Global Gag Rule. The policy prohibits US government funding of any health care organisation that provides abortion services, referrals or counselling (acknowledging abortion as an option), or advocates for the liberalisation of laws relating to abortion, even if they use non-US government funds to support such activities.

First instated in 1984 by Ronald Reagan, the Global Gag Rule has been in effect for 17 of the past 32 years. Trump’s executive order, however, constitutes a radical expansion of the former policy: whilst in the past the policy only applied to USAID and (after 2003) State Department funding, Trump’s order applies to funding from all US governmental departments and agencies, with no exemptions.

Approximately 9 billion dollars of global health funding is likely to be at risk of a result of the ban, including funding for vital public health initiatives which have nothing to do with abortion, such as prevention efforts targeting devastating and deadly communicable diseases like HIV and the Zika virus. Organisations will be either forced to accept the conditions of the gag rule, or face significant cuts to their budgets and closure of their services. Meanwhile, research has demonstrated past introductions of the Gag Rule to be associated with increases in rates of abortion. Likely, because, as a direct result of the ban, family planning services and education initiatives geared towards preventing unwanted pregnancy were forced to shut down.

An estimated 529,000 girls and women die from pregnancy-related causes each year; the vast majority of whom are women of colour, from relatively economically deprived parts of the world. About 68,000 (13%) of these deaths are due to unsafe abortion, with even higher rates in some countries, especially in parts of Sub Saharan Africa.

Beneath these macro level ‘health outcomes’ and ‘statistics’, the pernicious effects of the ban permeate the everyday lives of women and girls across the world. In-depth, mixed methods research, conducted by Coram International in 15 countries around the world has shed light on how legal and policy restrictions on access to abortion contribute to producing structural gender based inequalities and violence: curbing women’s freedom and autonomy and undermining their agency and personhood.

For example, research conducted by Coram in El Salvador explored how the absolute prohibition on abortion – even in circumstances where abortion is required to save the life of the mother – has both material and symbolic effects: deepening and entrenching social norms that subordinate women, repressing female sexual expression, and sometimes criminalising premature delivery and miscarriage. Women from poorer backgrounds, indigenous women, and those with disabilities are thought to be at particular risk.

Similar research conducted by Coram in diverse contexts such as the Philippines, Senegal, Sri Lanka and the UK also revealed links between legal and policy restrictions on access to abortion, and social norms endorsing male control over female sexuality. For example, in Northern Ireland, legal restrictions on abortion were found to reinforce shame and stigma associated with being sexually active as a teenage girl: young participants expressed the view that the law permits abortion only in circumstances of rape, because a woman or girl who had willingly had sex deserved to face punishing consequences for her “slutty” and “irresponsible” behaviour.

In many contexts, the prohibition on abortion also underlies violent practices, such as forced child marriage, female genital cutting, honour killings and suicide: Coram’s multi-country research in Bangladesh, Indonesia and Pakistan found that in communities with limited access to sexual and reproductive health services, early and forced marriage was viewed as the only appropriate solution for unintended pregnancy of unmarried young women and girls, as well as a necessary means of preventing it. Even in cases of rape, a young woman or girl may be forced both to marry her abuser, and carry the foetus to term, with potentially severe consequences to her mental and physical health.

Similarly Coram’s study exploring the sexual and reproductive health-related behaviours of teenagers in rural parts of northern Myanmar found lack of access to family planning services to be a significant driver of early marriage of girls; with suicide and abortion considered the only viable alternatives. Whilst abortion is criminalised in Myanmar (except to save the life of the mother) undergoing illegal and unsafe abortion is relatively commonplace, and a leading cause of death amongst young women and girls.

Encouragingly a number of countries including the Netherlands, Sweden and Denmark have joined a fundraising initiative to help replace shortfalls resulting from the Global Gag Rule, and ensure that comprehensive sexual and reproductive health and education services, acknowledging all options, including abortion, can continue.

A significant body of Coram International’s research has been funded by the International Planned Parenthood Federation (IPPF): the largest non-government supplier of contraception around the world. IPPF stand to lose hundreds of millions of dollars in funding as a result of the Global Gag Rule, which they have pledged not to sign, stating: “we cannot – and will not – deny life-saving services to the world’s poorest women.”