Over the past two decades, the issue of children in armed conflict has attracted growing attention and importance on the international stage. Numerous countries have suffered from conflict and civil wars including Syria, Sierra Leone, Colombia, Sudan, Sri Lanka, Rwanda and Democratic Republic of Congo. Civilians are often caught up in the conflict as victims or participants, and as internal conflicts grow the distinction is sometimes hard to draw.

With civilian populations often targeted by military campaigning, it is inevitable that civilian casualties are high, the largest proportion of non-combatant victims being women and children. The impact of warfare on children is huge. Not only are children perishing in conflicts, but conflicts also engulf every aspect of a child’s life. Children are made orphans; they may be seriously injured, left with grave psychological trauma, or internally or externally displaced.

Terrorism and extremism, although not a new phenomenon, has acquired new dimensions in the twenty-first century. Children are increasingly affected and victimised by terrorism and extremism, but they have also been shown in recent years to be increasingly engaged in terrorist related activity through recruitment and radicalisation. The rights of children affected by terrorism and counter-terrorism are an emerging area, which up until now has been largely overlooked.

A continuously evolving child rights arena, Coram International is at the forefront of policy and research dedicated towards the protection of children who find themselves in scenarios involving armed conflict or terrorism.

Grave violations of children’s rights are often committed during periods of armed conflict, with children subjected to the violence of war. These conflicts often cut off access to healthcare and other vital services that support the provision of basic human rights. Attending school is often disrupted and families are often split up in devastating fashion by death, displacement or recruitment. Child abduction and sexual violence are rife, and it is often the case that there is complete denial of humanitarian access and relief.

Coram International works to ensure children’s rights are enshrined and protected within each country during times of armed conflict. Our team of lawyers work on the implementation of UN treaties and conventions such as the Optional Protocol to the UN Convention on the Rights of the Child on the involvement of children in armed conflict.

Child protection systems during times of armed conflict are unsurprisingly weak or non-existent. Although international instruments such as the Convention on the Rights and the optional protocols attracted fast rates of ratification, implementation of their provisions and the adaptation of protection systems have been slow due to weak government structures. Agencies have also often been slow to assess the needs of children in complex situations, resulting in assistance being inappropriate or delayed. At the local level, traditional, community-based protective structures are also seriously weakened during times of armed conflict until they are ultimately destroyed.

Our team of experts help support organisations in assessing the protection needs of children, as well as evaluating government and NGO child protection programmes at the organisational, community, district and national levels.

For a long period, crimes against children went largely unpunished and perpetrators were not held accountable. Over the past 20 years, however, there has been a clear change amongst the international community towards accountability for international crimes committed against children during times of armed conflict. Access to justice for children can be achieved through judicial, non-judicial and traditional justice mechanisms.

Our team of legal experts are proficient in assessing the legal instruments governing armed conflict in relation to child perpetrators and victims and their implementation at international and national level.

Due to the evolution of terrorism during the twenty-first century, including issues such as online radicalisation, children are becoming further engaged by terrorist organisations across the globe. De-radicalisation programmes are scarce, and the ones that do exist have limited outreach and have the inability to provide interventions where children need it most. Coram International is currently working with partner organisations to conduct further research and evaluation in this emerging area that will only grow in importance over the coming years.

The line between child combatants in armed conflict and children engaged in terrorist related activity is very thin, yet the approach taken to both these groups is radically different from a justice perspective. There is currently very little discussion on the use of community based restorative justice programmes for children convicted of terrorist offences, both nationally and internationally, even though it is increasingly apparent that pursuing criminal prosecution alone is unlikely to address issues of radicalisation.

Coram International works towards the adaptation of international and national legislation to combat the growing risk of extremism and radicalisation, as well as providing research and systems expertise in designing, assessing and evaluating counter radicalisation programmes.

The high expectations in enabling access to justice in post-conflict scenarios mean many systems and mechanisms fall short of the ideal. Coram International works to support governments and organisations in channelling their resources to ensure that children’s access to justice is maximised.

Our team is skilled not only in assessing judicial forms of justice, but also providing expertise on non-judicial forms which allow a wider number of children to be heard. We also advocate for the acknowledgement, and programme design, of justice processes that account for the loss of education, family and childhood, as well as focused on issues such as recruitment and abduction

Children become associated with armed forces and groups for a variety of reasons. Forced recruitment is widely recognised as a pivotal factor where many are abducted, drugged and beaten into submission. There are however numerous other push and pull factors including poverty, a sense of identity, lack of opportunities and options to name a few. Seeing family members raped or killed and their community attacked also acts as a powerful motivating force. Due to this cycle of violence, children often become both victims and perpetrators.

Coram International works hard to ensure that the prosecution of children should always be regarded as a last resort, and engages actors continuously to ensure they are aware of the influential context within which these children find themselves when engaging with armed groups. Rehabilitation and reintegration into society are key principles that Coram International advocates for, supporting the Convention on the Rights of the Child which states that any solution must take into account “the child’s reassuming of a constructive role in society”. 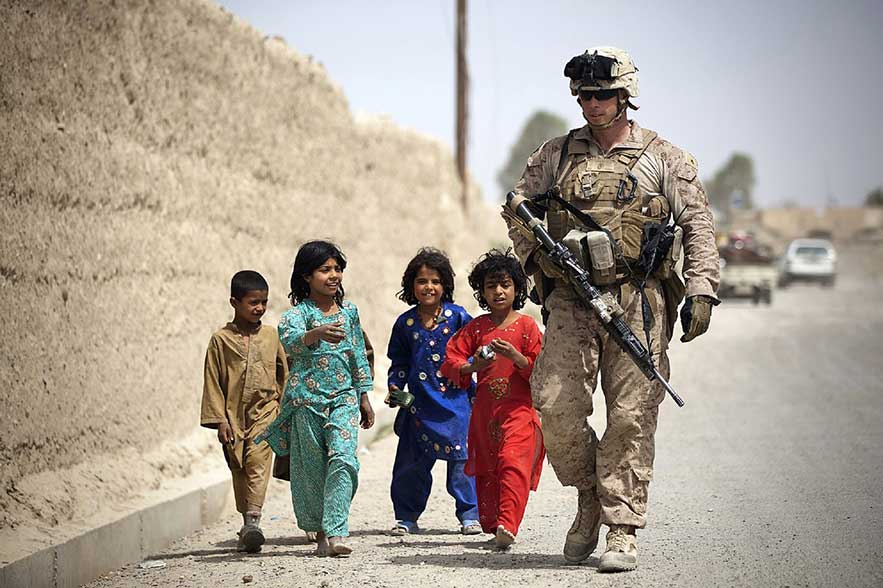 In 2012, Coram International developed a two-week training course on child rights and child protection in armed conflict for KAIPTC, an international research and training centre that conducts professional training courses on conflict prevention, management and resolution.